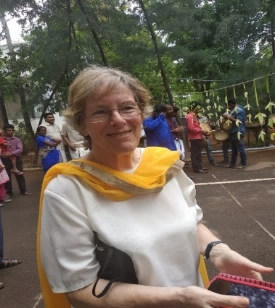 Shortly after moving into Hampstead Norreys in June last year, I have been granted official “Permission to Officiate” (PtO).  This means that, by invitation of our Team Rector, Wayne, and Team Vicar, Sue, I can look forward to joining and supporting our Ministry Team.  It was an absolute delight to meet some of you already  in St Mary’s (HN).  Thank you for your lovely welcome!  As a new member, therefore, of your Ministry Team, Wayne asked me to share a bit about myself with you and so, here we go …

My secular life was geared mainly to working as a secretary/PA.  I was trained by British Petroleum in its secretarial training school in the City of London.  Later, I had a complete change of direction when I joined the WRAF.  My last secular employment, spanning some 14 years and leading to my retirement, was spent as a fee earner in the Law – in the fields of conveyancing, and some probate work.

I spent the first years of my life with a foster family in Kent (with whom I am still in regular contact), moving to London to live with my mother and step-father at the age of 11½.

I met my husband (Don), while serving in the WRAF and stationed in Germany.  I was due to be repatriated to UK well before he reached the end of his overseas tour and so I took voluntary discharge on marriage grounds.  We bought our first home, near Devizes, Wiltshire, in 1981.  During my time there, having served, in turn, as sidesman, choir member, altar-server, and Lay Pastoral Assistant, as well as PCC Secretary for some years, I was invited to consider ordination to the priesthood.  My faith has been hugely important to me for as long as I can remember and so, after a period of prayer and reflection and with Don’s agreement, my training commenced.  Ordination as Deacon followed in 2003 and I was priested the following year.  Sadly, after an extended period of poor health, Don died in January 2008.

So far as my ministry is concerned, I served alongside my then Benefice Ministry Team initially and then, from 2009-2015, I was Priest in Charge of three parishes, still in Wiltshire.  Separately, I have taken part in two short mission trips to South Sudan, served as a locum parish priest in New Zealand, and worked for six months as an English “teacher” at a theological college in Chennai.  I also engaged in various fund-raising activities for charities, including a sky-dive, fire-walking, trekking in the Himalayan foothills in Nepal walked the 496 mile pilgrimage to Santiago de Compostella, followed by another trek of 126 miles in 2011, on another route.  And of course there were other bits and pieces along the way.  I stopped short of abseiling down the church tower when it was discovered the stonework was unstable – one of the pinnacles had become detached while we were in the planning stages!  Very importantly, I was professed as a member of the Third Order Franciscans in 2011.

And more recently?  Having been widowed for 14 years, I felt ready to move closer to my family, here in West Berkshire and, as mentioned above, I moved into my new home at the end of June last year.

And my dreams so far as my future ministry is concerned?  Well I just pray for continuing good health so that I am free to support “the Team” and serve for as long as possible!  I love to lead worship and engage in pastoral work and I look forward to meeting you, and becoming a visible and accepted member of my new “family” here.  As such, it just remains for me to say a huge “thank you” for already making me feel so welcome and for the help so many of you have given:  advice, encouragement, and help with settling into my new home (and garden) here in Hampstead Norreys.

May Blessings and Peace be yours this coming year.  May the loving arms of our Gracious Lord enfold you, and all those you love this day and always.